Tips to Prepare Kids with FASD for Traveling 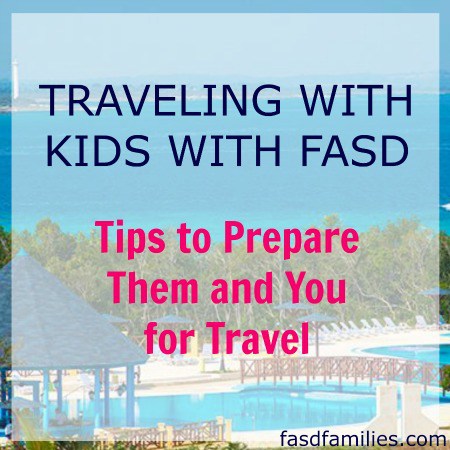 A couple of weeks ago I was chatting with our social worker who asked me what we’re doing for Easter. I said that I’ll deal with that when it gets here. She reminded me that it was here and Easter weekend started that Friday. Ummm. No. Just no. Holidays are hard for my guys and worse for me. That’s probably because I have a DIY/Lifestyle blog and want everything to be homemade, handmade, and perfect. When you couple those expectations with two little boys who have FASD running wild through the house for 4 days while daycare is closed while I try to pull together a ginormous meal…well, let’s just say it doesn’t usually end well.

So this time I panicked and hit up the last minute vacation sites until I found an all inclusive deal to Cuba for 3 for $1800 (CAD). With barely three days notice, we took off on vacation. At some point, when the trauma wears off, I’ll share the details of how the boys behaved at the airports and waiting for transportation connections. It wasn’t good. It wasn’t even bad. It was awful.

But today I wanted to get my brag on and give a shout out to all of us that are accused of “helicopter parenting” and “being overly protective”, too “controlling” and all of those other things that we hear from people who don’t know what it’s like to raise children with FASD.

Because my guys were, quite literally, the best behaved children at the resort that week. Who knew? They were well behaved, shared their toys, used lovely manners, waited patiently at the buffets and in restaurants, ate nicely, and even tried out some Spanish words, thereby making all the staff fall head over heels in love with them. Liam, who is really social and loves people, couldn’t resist saying “Hola” to every single person he encountered. Aiden just copies everything Liam does, allowing him to ride on Liam’s coattails. The boys also learned to say “encontado” (nice to meet you) and “gracias”. Yup, people were charmed.

But what was really impressive was their behavior at the beach and pools. Last year, Liam barely got in the water without tears and tantrums (#sensoryoverload) and our three weeks in Florida and Alabama resulted in him have this crazy week long manic looking episode. On this trip, with lots of patience, water wings (we used these ones), and plenty of trust building, both boys were “swimming” within two days.

What I really loved was how kind and polite the boys were. To each other, to other kids, and to pretty much everyone they met. Which was  stark contrast to the tantrums and rudeness that we saw with “normal kids” all over the resort. One child, in particular, the dreaded Jude, managed to clear the kids pool with his arrival every afternoon with his bratty and unmanaged behavior. His parents talked nicely to him, said his name over and over, told him to be good, and I watched them spend 45 minutes trying to coax him out of the pool. He took toys from other kids and his parents allowed it. He bullied the other kids until they ran and his parents smiled fondly, commenting about what a handful he was. He ran wild in restaurants, stacked and played with the ice cream bowls at the buffet, leaving most of us unwilling to use them (hello, germs!) while his parents chatted and enjoyed themselves and allowed it to happen. They had no follow through and they seemed almost afraid to intervene. No doubt. His tantrums when he didn’t get his own way or had to get out of the pool were epic. Good luck with that.

So for all of you who hear that you’re over controlling and you’re not doing your kids any favors by managing them so closely or have to constantly answer the “How are they going to manage in the real world when you…..?” The answer is, “Just fine, thanks very much.” The result of all that micro-managing, keeping expectations low and age appropriate and helping kids manage their situations resulted in very well behaved and happy boys on vacation.

On the third day of our vacation, I was getting the boys plates filled for breakfast while they waited nicely at the table (Seriously…are these the same kids that needed special high chairs to keep falling out at home?), sipping their juice and chatting to each other when an older gentlemen stopped to ask if those were my children. He then told me that he and his wife were talking about how well mannered and behaved they were every time they saw them either at the buffet or on the resort. I think I stared blankly for a few minutes wondering if he’d been referring to some other kids until I realized he was right. I talked about that with the boys for the rest of the week. They love hearing when they’ve been good and are so suggestible. Like the time I told Aiden he was a good sleeper and always goes to bed happy. Since that time, he literally smiles his way to bed, even after arguing that it’s not time for bed. Bless him.

TIPS FOR TRAVELING WITH KIDS WITH FASD

I don’t normally do resorts because I like learning about new places, cultures, and meeting local people. But I don’t think you can go wrong with an all inclusive resort with kids of any age, particular kids with special needs. We didn’t leave the resort the entire week. Again, not my preferred way of seeing a country but with kids with FASD, the resort itself provided more than enough stimulation. I think any side trips or excursions would have pushed the boys into an over-stimulated mess. Swallow the travelers guilt, and accept that the resort is perfect all on it’s own.

Also, if you’re planning any sort of night life when traveling with younger kids, think twice. First of all the disco usually doesn’t open until 11pm in most places. The kids need to be in bed long before that. At least mine do.

I also dropped all, or at least most, of my expectations around what the boys should and shouldn’t eat. They tried virgin pina coladas, drank slushies (one per day, not ten!), and Liam had his first Shirley Temple. Up until that point, they’ve never had anything that wasn’t water, pure juice, or milk. And I gave them things I knew they would eat. Which meant a lot of rice and pancakes. They wouldn’t eat the fruit or even the cucumbers or carrots which they generally love at home. Whatever. I brought their constipation medication along and they did fine. I asked them to try a bite of new foods and when they did, I was pretty happy. Good enough.

Because the boys needed to carry their own backpacks and would need to do lineups, seat belts and all that good stuff, we did loads of practicing at home.

I packed their backpacks (we bought and love these ones!) first and had them practice wearing them at home along with not opening them, reinforcing both the reality that they would have to carry the packs and could only open them on the airplane. They loved this and I think it helped. I watched lots of kids refusing to carry their packs or throwing things around at the airport. Kids with FASD need lots of repetition and this prepping really helped the boys understand what was expected of them.

We also practiced standing in line, boarding planes, and take offs. They loved that!

Sounds like a contradiction to “Lower Your Standards” doesn’t it? It’s not, really. I’m a tough parent with expectations and standards wherever we go. As an example…those backpacks. We also used those to lug their toys and water wings to the beach. When the boys fussed about carrying them, I literally would walk out the door without them. You don’t carry your toys, you don’t get your toys. That only happened once when they arrived at the pool, couldn’t go in the “big pool” (no water wings!) and had no toys to play with. I didn’t go back and get the backpacks either. I just reminded them that they could get them after lunch and would have to carry them on their own. They never fought me again about that. #parentingwin

Could I have gone back for the packs? Or carried them? Sure. But as I kept telling them. I brought my stuff to the pool and carried it there and was having a very nice time so I wasn’t going anywhere until lunch. For kids that struggle with cause and effect, they caught this lesson pretty fast. Probably because they had two hours of playing in the baby pool while they stared longingly at the big, fun pool. You know. Since you refused to carry your water wings and all….

I also made sure that they got to bed at around the same time as they do at home, give or take an hour or so. which was between 830 and 9pm every night. We usually had a late dinner, (we eat pretty late at home, too), walked back to the room, and went to bed. Not wildly exciting, no nightlife to speak of, but it kept them well rested and on track. Interestingly, while the boys have fans and black out curtains at home, they would fall asleep with the lights on while I puttered about or read books. Resort vacations are exhausting y’all….lol.

We booked our trip with a few days notice and I told the boys on Wednesday that we were going to Cuba on Saturday. That set off rounds of “What day is it?” and “When are we going?”. Like ten times an hour, every single hour. Or my personal favorite….”Are we in Cuba yet?” the minute we started driving to the airport. I think that had a lot to do with excitement, anxiety, and perseveration. I talked about how long it took to fly there, how they would need to stay in their seats, and what we would do everyday. Mostly swimming and being “in summer”. We even talked about what kind of foods we’d eat and that things would taste different. We practiced some Spanish phrases which really paid off in the cuteness factor later that week.

YouTube is full of great videos including kids on airplanes, take offs and landings, and has clips of just about any destination you’re heading to. We watched loads of plane and airport videos and the boys really enjoyed anything that showed kids during take off and landing. I’m not sure they took in much about our destination but I think it helped prepare them for what things would look like when we arrived. We used YouTube to listen to people speaking Spanish as well.

In the interest of full disclosure…. the airport and transport to and from, particularly on the way home, was a complete disaster. I have some thinking to do about that one before I can share ideas to make that more successful. I’m on it, so stay tuned. 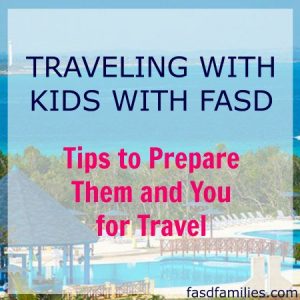 We’re planning to do a ton more travel, particularly in the next year and a half before the boys start school in September 2017 (if the agency stops fighting about daycare and and trying to push Liam prematurely into school and all). I hope you’ll pop by, explore our new site, and sign up for updates to follow along. Lots of fun stuff coming over there.

This article originally appeared at www.fasdfamilies.com.