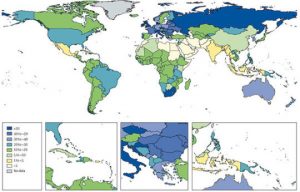 Worldwide, an estimated 119,000 children are born with Fetal Alcohol Syndrome (FAS) each year, a new study from the Centre for Addiction and Mental Health (CAMH) shows.

The study, published in The Lancet Global Health, provides the first-ever estimates of the proportion of women who drink during pregnancy, as well as estimates of FAS by country, World Health Organization (WHO) region and worldwide.

Nearly 15 per 10,000 people around the world are estimated to have FAS, the most severe form of Fetal Alcohol Spectrum Disorder (FASD). FAS is characterized by mental, behavioural and learning problems, as well as physical disabilities. In Canada, the estimate is 10.5 cases of FAS per 10,000 people.

Not every woman who drinks while pregnant will have a child with FAS. “We estimated that one in 67 mothers who drink during pregnancy will deliver a child with FAS,” says lead author Dr. Svetlana Popova, Senior Scientist in CAMH’s Institute for Mental Health Policy Research.

She notes that this figure is very conservative and does not include other types of FASD that may occur from alcohol consumption during pregnancy, including partial FAS (pFAS) and Alcohol-related Neurodevelopmental Disorders (ARND).

Although it’s well established that alcohol can damage any organ or system in the developing fetus, particularly the brain, it’s still not known exactly what makes a fetus most susceptible, in terms of the amount or frequency of alcohol use, or timing of drinking during pregnancy. Other factors, such as the genetics, stress, smoking and nutrition also contribute to the risk of developing FASD.

“The safest thing to do is to completely abstain from alcohol during the entire pregnancy,” says Dr. Popova.

The study involved comprehensive literature reviews and statistical analyses to determine the estimates, which are intended to help countries plan public health initiatives and policies, such as FAS surveillance systems and educational efforts on the risks of alcohol use during pregnancy, the researchers note.

The five countries with the highest alcohol use in pregnancy were in Europe: Russia, United Kingdom, Denmark, Belarus and Ireland. As a region, Europe also had a 2.6 higher prevalence of FAS than the global average. The lowest levels of drinking and FAS were found for the Eastern Mediterranean and South East Asia regions, as there are high rates of alcohol abstinence in these regions.

The predictive model that the research team developed in this study could also be used to estimate the prevalence of other disease conditions, notes Dr. Popova. Her team is currently extending this work to study the global scale of all fetal alcohol spectrum disorders (FASD). An earlier study by Dr. Popova and her team, published in The Lancet last year, showed that more than 400 disease conditions co-occur with FASD.

Materials provided by Centre for Addiction and Mental Health. Note: Content may be edited for style and length.