Opioid Addiction and Pregnancy: Everything Can Still Be Okay 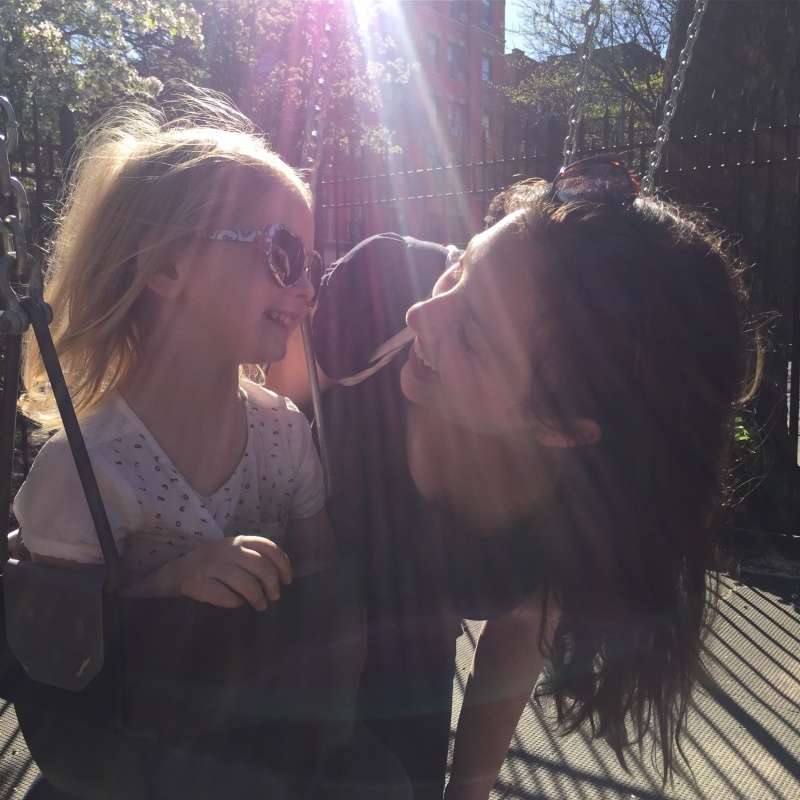 The date of the last time I used heroin correlating so closely with my daughter’s birthdate felt like a horrible secret, like the worst math in the world. 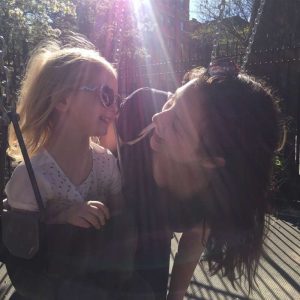 The stigma of being a mother with a substance use disorder is so pervasive, but we need to stop hiding in the shadows.

To other mothers, I’d confide the minimum: “I’m in recovery,” or “I ‘got clean’ before I had my daughter.” I felt invested in a false narrative fairy tale of my recovery having happened overnight, as if the moment I found out I was pregnant the dark part of my life ended and the beautiful part began.

In reality, my past and future bucked right up against each other. Having struggled with opioid use disorder for years, my body barely functioning, the last thing I’d expected to be was pregnant. I was shocked to learn I was six months along. The reasons I’d used drugs to begin with, all the ways those reasons had snowballed during addiction to make heroin even more alluring, and the challenges of past attempts at treatment suddenly seemed like simple, enviable problems compared to the loneliness and shame of being pregnant and addicted.

While technically accurate that I stopped using heroin before my daughter was born, it’s only true by a hair.

Medication-assisted treatment (MAT) with methadone or buprenorphine is the current gold standard of treatment for pregnant women who have opioid use disorders. Women in the position I was in are most in need of high-quality, effective treatment—for the mother’s sake, and for our children’s—but treatment can be hard to find and we often encounter tremendous bias when seeking help. Even for people who have sympathy for the disease of addiction, a pregnant woman dependent on opioids is a hard sight to stomach. I internalized this stigma, and as I began reengaging in treatment I felt mortified by the belly under my winter coat.

I was addicted, my addiction was harming my unborn child, and I needed help. It’s also true how much I love my child, even though I struggled to stop using heroin, and that those hard facts can exist together in the same messy sentence.

Fearful that MAT would cause my baby to be born ‘addicted,’ I wasted weeks attempting to taper off heroin. Detox is a dangerous course of treatment for anyone addicted to opioids— putting them at heightened risk for relapse and fatal overdose—but is particularly ill-advised for pregnant women as withdrawal can lead to preterm labor or even fetal death. Every morning I woke up and tried, then failed, to kick heroin cold turkey. Every night I counted backward from the fast-approaching due date. “First babies are often late, I still have time to fix my life, everything can still be okay,” I remember hoping, as if hope alone could cure my disease.

An informed, compassionate obstetrician finally righted my thinking on MAT and helped me enroll in a methadone maintenance program. To say a baby prenatally exposed to opioids is born ‘addicted’ is medically flat wrong. They might initially be physically dependent and exhibit treatable symptoms of withdrawal, but they do not meet the criteria of addiction, which is a “chronic, relapsing brain disease that is characterized by compulsive drug seeking and use, despite harmful consequences” (NIDA, 2014). This distinction is crucial, and more widespread understanding of it would go a long way toward reducing the stigma against pregnant women embarking on the lifesaving treatments of methadone and buprenorphine maintenance.

In addition to treating the symptoms of opioid addiction and decreasing the dangerous behaviors associated with injection drug use, MAT stabilized me to begin engaging in counseling. Methadone was not a magic bullet, and I was not always a perfect patient, but it was an invaluable tool in the early stages of my treatment plan, which went on to include an intensive outpatient program, group and individual therapy, and later a transition to buprenorphine.

My light-switch moment didn’t happen when I found out I was pregnant. It happened when my daughter was a few hours old, in the hospital. A nurse told me she was taking her for a bath, but she never brought her back. I tried to bargain with her, to convince her to allow me to keep my baby with me in my hospital room. My daughter’s birth was complicated not only by my addiction but by my involvement with the criminal justice system, and while I now understand that precaution and agree with the need to keep children safe above all else, in the moment her removal felt devastating.

I remember exactly the trajectory of the bassinet wheels on the floor, through the door and to the right. It was at that moment that I decided to never again be in a position where someone could take my child away and not bring her back. Abstinence and reduced substance use is the primary goal but not the only benefit of MAT; because I had already started engaging in counseling and stopped associating heroin with the cure for any pain, I was able to use that wrenching moment as a catalyst for further recovery instead of as a perfect storm for relapse.

I was permitted to go to the nursery every three hours to sit in the rocking chair and feed my daughter. She was such a beautiful baby, with the same little rosebud mouth and cute rabbit feet she’d had in the ultrasound photo taped to my fridge. My mom said she looked exactly like me as a newborn. Seeing this sweet innocent baby, made of me and who’d thrived in spite of my disease, reminded me of the person I was before I’d become addicted to heroin. Everything could still be okay.

There was a clipboard on her bassinet, tracking any signs of neonatal opioid withdrawal syndrome (NOWS, also known by the more general term neonatal abstinence syndrome or NAS). Did she sleep? Was she irritable? Tight muscle tone? Tremors? Has she sneezed? Methadone is a long-acting opioid and it’s not uncommon for symptoms to take 48 hours, or more, after birth to develop. Every day I, my family, and the medical staff watched her with our breaths held, but any symptoms remained extremely mild and below the threshold to necessitate transfer to the NICU or intervention with medications.

What factors determine whether a newborn will exhibit signs of NOWS, and how severe their symptoms will be, is an area in need of further study; basically, we were lucky. I’m grateful that she didn’t experience withdrawal—a heartbreaking, but treatable condition—but even if she had, MAT would still have been the safest course of treatment, for both of us, throughout my pregnancy.

All new mothers worry about their babies, but my worry was intensified by guilt. Every month, as I worked my way through the child welfare system, I’d go through the milestones in What to Expect the First Year as if that checklist were my bible. My daughter’s early talents for rolling over and crawling felt like validation of my decision to go on methadone, and of my worth as a parent. Conversely, when she turned one and didn’t feel like walking yet—probably because she was such an awesome crawler—or turned two and threw tantrums, I panicked, thinking it was somehow related to my substance history.

The date of the last time I used heroin correlating so closely with her birthdate felt like a horrible secret, like the worst math in the world. One day her pediatrician looked at me and said, “she’s doing great; you need to let go of your guilt.” All mothers, and their children, should receive the support, dedication, and encouragement from their medical providers that we were so fortunate to receive.

The studies on the long-term developmental and behavioral effects of prenatal opioid exposure are inconclusive, in part because it’s so difficult to distinguish possible results of the pharmacological substance from impacts of the adverse childhood experiences typically associated with caregiver substance misuse, such as instability, poverty, and the traumas of either removal from birth parents or of remaining in a home environment made dangerous by active addiction. As Dr. Joshua Sharfstein, Associate Dean at the Johns Hopkins Bloomberg School of Public Health, recently explained on NPR, “while there’s no evidence of ‘huge, obvious differences’ in children who were exposed to opioids in the womb, there is a lot of research showing that the social environment plays a critical role in determining a child’s future.”

What we do have conclusive evidence on is prevention. A key element in preventing the development of a substance use disorder is delaying the age of drug and alcohol use initiation, especially while the adolescent brain is still developing. Knowing that my child likely carries a genetic predisposition for addiction makes it all the more important for me to bolster her protective factors through parental involvement, programs that improve self-control, and attachment to our community: prioritizing addiction prevention just as I prioritize the prevention of other medical conditions.

At five years old, she is a happy, healthy, resilient little girl; I am proud to also be able to say that five years into recovery, I am her happy, healthy, resilient mother. Our math no longer feels like the worst secret in the world. When I’m brushing her hair before school, she holds up her arms and exclaims “Mama loves me this much, so much I can’t even reach that far!”

The stigma of being a mother with a substance use disorder is so pervasive that even those of us who make it out the other side can be hesitant to share our stories, but we need to stop hiding in the shadows. The doctors, social workers, and police officers who too often only see us on the worst days of our lives deserve to hear the happy endings. And, most importantly, the mothers out there, right now, currently struggling with the same things we struggled with, these women and their families need to know that with evidence-based treatments and wraparound recovery supports, everything can still be okay.

By Morgan Gliedman 01/31/18 . This article appeared originally at The Fix on their website.