My Child With FASD Is A Warrior! 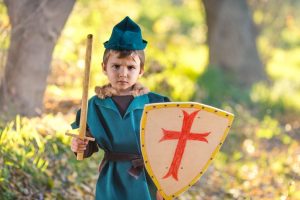 The world often looks at a child like mine, who suffers from fetal alcohol spectrum disorder (FASD), as a hopeless case. But that couldn’t be further from the truth. He is a warrior. And he is overcoming this disorder every single day!

My son sat slumped next to the front door in a defeated posture.  “What’s wrong kiddo?” I said. “We’re going to church and you won’t tie my shoe for me!” he shouted back. I jumped, surprised at his response. He hadn’t asked for help. To my knowledge, he hadn’t even been sitting there that long. I crouched down next to him. I almost yelled but remembered quickly that my son’s brain doesn’t work like other children, he has FASD (Fetal Alcohol Spectrum Disorder) and his frustration level goes from 0-60 without warning. I took a breath again and asked if I could show him how to do it with one shoe and he could do it with the other shoe. “No!” he shouted again. I stood up and calmly reminded him that shouting hurts my feelings, I would be happy to help when he was ready.

I walked a distance away and waited. Half an hour went past and his facial expression changed. He took a shoe lace in each hand and with marked concentration talked himself through the steps of tying his shoe. When he was done with one shoe he looked up at me and asked with exhaustion, “Mom, will you do the other shoe?” I walked over and tied his shoe and squeezed his shoulders, “good job buddy.”

Thirty minutes is how long it took for him to be ready for the task. Thirty minutes! My brain works at a pretty quick pace. I almost never sit still for a moment. Patience is not my greatest quality. 30minutes to me is like an eternity but for my son, that’s how long it took for his brain to reregulate. I was tempted to sit and stew about the wasted time but then I looked at his sweet face contorted with frustration. I desperately wanted to scoop him up, reach into his brain and push the button for peacefulness. I wanted to bypass the block that keeps him from doing multiple step directions with ease. I can’t do that. He can’t do that. His brain is like a simmering pot. Just one small nudge on the temperature and he starts boiling. Just like that boiling pot, it takes some time for his brain to cool down and start thinking clearly again.

What I felt as I watched his face go from anger to defeat to peace to determination was sheer pride. My son is a warrior. He doesn’t let anything defeat him. He may get frustrated for a moment but he always returns to the task at hand with a resolve that rivals any other. Simple tasks have always been difficult for him but he absolutely, never quits. When the battle gets messy, he pushes forward. When the fight gets hard, he lets out a battle cry and charges toward the future.

‘When the fight gets hard, he lets out a battle cry and charges toward the future.’

He was the last student to read in his class. We held him back a year to give him some extra time. He loved to look at pictures in books from the time he was a baby but if he felt the pressure to read, he would throw the book down and clench his fists in frustration. Things may be harder for my son, but he is not a quitter. He kept picking that book back up and by the end of 2nd grade it clicked, he could read. He worked 10 times as hard as his peers but never gave up. Even better, he LOVES to read. He finds joy in turning each page and HE is the one who accomplished that!

When I was 13 I thought it would be cool to learn to knit. I bought knitting needles and some yarn and borrowed a book on knitting from the library. I practiced for about a day and then quit. At 16, it was the guitar. At 25, it was running. At 30, it was painting. At 35, the ukulele. Tasks have always come easy for me and when they don’t, I shake off the disappointment and try something else. For my son, most tasks are difficult, but he never gives up. FASD has changed the way his brain works but it has not ruined his life. He is amazing, he is a warrior.

This blog appeared originally at www.confessionsofanadoptiveparent.com