Fetal Alcohol Syndrome: The Dangers of Drinking While Pregnant 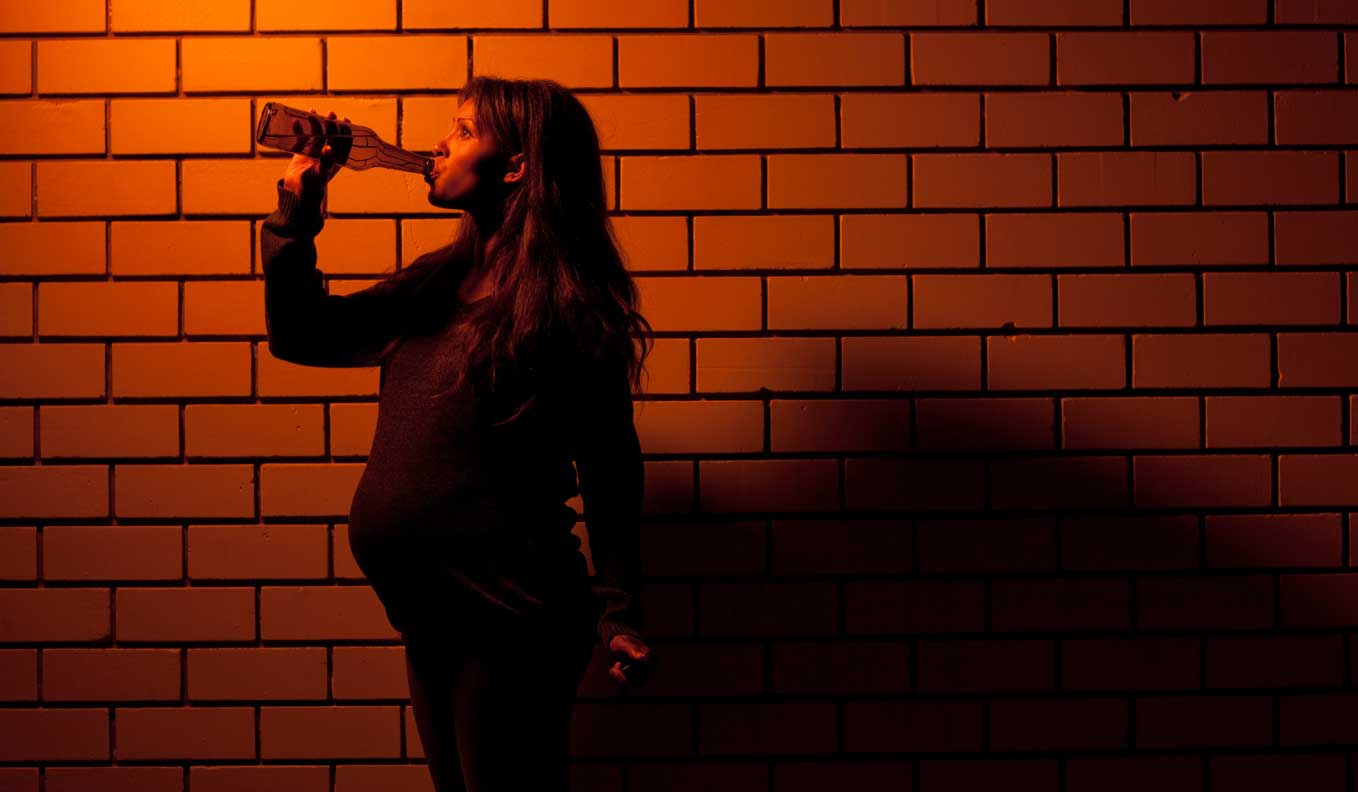 Most women in the U.S. have heard that you shouldn’t drink while pregnant. What many don’t know is the true extent of damage that a few drinks can have on their unborn child. For the majority of history, alcohol has been seen as harmless for pregnant women. There was a time when it was even encouraged. It wasn’t until 1981 that the Surgeon General first told women to avoid alcohol while pregnant because of the possibility of birth defects. This was the first time in the U.S. that Fetal Alcohol Syndrome (FAS) was publicly acknowledged. FAS can cause a number of health problems for infants that carry over into childhood and adulthood, but it’s 100 percent preventable.

What Is Fetal Alcohol Syndrome?

Fetal Alcohol Syndrome is a type of Fetal Alcohol Spectrum Disorder (FASD) that can cause mental retardation, physical malformations, and multiple learning and behavior problems. While some symptoms can be treated, the disorder itself is permanent. The negative effects are so strong that the Institute of Medicine stated, “Of all the substances of abuse (including cocaine, heroin and marijuana), alcohol produces by far the most serious neurobehavioral effects in the fetus.”

What Are the Causes of Fetal Alcohol Syndrome?

Fetal alcohol syndrome is caused by alcohol entering the blood stream of an unborn child, which occurs when a woman ingests alcohol while she’s pregnant. When alcohol is consumed during pregnancy, a percentage of it passes to the placenta and to the fetus, where alcohol is more concentrated. An unborn baby’s liver isn’t developed enough to process alcohol, so as a result of this higher level of alcohol concentration, the unborn child may not receive the sufficient oxygen and nutrition that he or she needs.

The lack of sufficient oxygen and nutrition affects proper development, which is what causes physical and neurological damage to the child. This damage can occur as early as the first few weeks of pregnancy. The first trimester is typically the most dangerous time for a pregnant mother to consume alcohol, but it can be dangerous to the fetus at any time during pregnancy.

The signs of FAS are often noticeable in early childhood, but few people know how to recognize them. A newborn with FAS typically has a low birth weight and lags behind in growth. He or she may also show a specific pattern of facial malformations that usually includes small eye sockets, smooth skin between the nose and upper lip instead of a crease, and flattened cheekbones. FAS is often accompanied by Alcohol-Related Birth Defects (ARBD), such as problems with the heart, kidneys, skeleton, ears and eyes.

Throughout childhood, individuals with FAS (or a related disorder) may struggle with interpersonal boundaries. They might need excessive physical contact and show hyperactivity. They might also have trouble remembering things, have a short attention span, and struggle with their motor skills.

Teachers are often the first to notice that something is wrong. According to National Organization on Fetal Alcohol Syndrome, some signs in the classroom are:

As the child reaches the teenage years, he or she might have trouble with appropriate sexual behavior and may even find himself or herself having problems with the law. He or she might have poor impulse control and need daily reminders of basic concepts.

It’s easy to dismiss a child with FAS as simply unusually stubborn. The student might even have a high IQ, leading teachers and even doctors to overlook FAS. However, this syndrome reaches beyond these indicators. Children affected by FAS often struggle with abstract concepts like time, cause and effect, and mathematics. This inability to generalize from one situation to the next means many individuals with FAS will struggle with the basics of daily life as they grow older.

Even if a child doesn’t show facial abnormalities, he or she still might have problems resulting from the mother drinking while pregnant. Over 85 percent of children who have damage from prenatal (in vitro) alcohol exposure show no physical abnormalities, only mental and behavior struggles. This often indicates an Alcohol-Related Neurodevelopmental Disorder (ARND), where an individual shows developmental disabilities with behavioral and learning problems without the facial abnormalities that indicate FAS.

The effects of FAS can be especially difficult to navigate during adulthood when individuals are expected to take care of themselves. Adults with FAS often need support as they try to navigate housing, employment, transportation, and money management.

Unfortunately, an overwhelming number of individuals will never receive the help they need to succeed. In a University of Washington study of people with FAS (ages 6 to 51), 79 percent had employment problems. Sixty percent of those over age 12 had trouble with the law, and 35 percent had drug and alcohol problems.

FASD researcher Dr. Ann Streissguth has identified a number of secondary conditions that most individuals with FAS or ARND have, such as mental health problems, homelessness, disrupted schooling, and eventually, difficulty taking care of their own children. It takes specialized coaches and counselors to help these individuals have happy, relatively independent lives.

FAS is lifelong and can bring huge difficulties to the individual and his or her family. However, it’s also completely preventable. The only cause of FAS is exposure to alcohol during development. The following are some of the myths that many women who are expecting or may be expecting believe:

Fact: The fetus can’t tell what kind of alcohol it is. All alcoholic drinks, including wine, beer, and coolers, have pure alcohol that will pass through the umbilical cord into the developing baby’s system.

Myth: “The baby’s due any day now. It can’t hurt to drink at this point.”

Fact: Actually, your child is still developing and will continue to develop after birth. You should avoid drinking even during breastfeeding, as the alcohol can pass into the milk and affect the baby.

Myth: “I’m not pregnant yet, so this doesn’t apply to me.”

Fact: Many women who are sexually active without effective birth control become pregnant and drink before they realize they’re pregnant. In the U.S., 1 one in 9 pregnant women binge drinks some time during the first three months of pregnancy, and as many as 1 in 5 women report drinking in the first trimester. If you might become pregnant in the near future, stop drinking.

What Are the Treatments for Fetal Alcohol Syndrome?

Unfortunately, there is no treatment or medication of any kind that can reverse the symptoms of FAS. The syndrome is a permanent, irreversible condition. However, there are early intervention treatment (if the diagnosis is made before the age of 6) options available to benefit children with FAS. These services can improve the child’s development and may include education and behavior therapy as well as medical care.

For the mother, father and any other care giver or loved one of a child with FAS, there are counseling services available. If the mother is struggling with alcohol abuse even after the child is born, there are rehabilitation services that can help, which you can learn more about in the next section.

How to Prevent Fetal Alcohol Syndrome

The most obvious way to prevent FAS is to simply refrain from drinking alcohol while pregnant. This syndrome is 100 percent preventable if no alcohol is consumed during this time. It’s important to also abstain from drinking alcohol if you’re trying to become pregnant, or if you think you might be pregnant. It’s better to be safe than take a chance. Take a pregnancy test as soon as you suspect that you’re pregnant. If you discover that you were drinking after the time of conception, let your doctor know, and stop drinking immediately.

If you struggle with alcoholism and want to have a healthy pregnancy, now is the time to say enough is enough. An alcohol addiction can feel impossible to overcome, but you’re not alone. At The Recovery Village, we offer a full spectrum of care. We’ll be there to support you from the moment you decide it’s time to make a change through holistic treatment options and even beyond, through aftercare. Learn about our alcohol treatment programs and begin your journey to a new, sober, fulfilling life.

This article appeared originally at The Recovery Village www.recoveryvillage.com