Doctor: Pregnant women are ‘the least, the last and the lost of the opioid epidemic’ 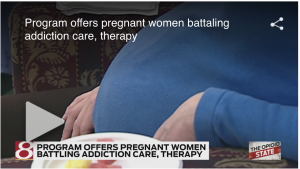 INDIANAPOLIS (WISH) — Rheleane Hobbs has worked as a nurse for kids and babies and babies’ moms for more than 20 years.

But it was only in the last year, when she found the moms who needed her most.

“I’m sorry, I get emotional,” she said as she talked about her new job.

Those emotions come from a mom who has had the most unwanted kind of knock at her door.

“It was a police officer and they had said that my son was found down at a hotel and that he was on a ventilator and he had been there for 18 hours and they weren’t able to reach me and they found me through Facebook and they sent the officer down the street to tell me. We’re over an hour away, and told me that we may need to make some life-changing decisions and that he was very bad,” she said.

It was a drug overdose.

“For a mom, the thoughts that went through my mind,” she said.

32 days later, her son was out of the hospital. Three years later, he’s clean. And Rhelean is working with pregnant moms dealing with an addiction of their own.

“When my patients come and they’re here for opioids, one of the very first things I tell them is ‘I get it, I’ve been there and I’ve been that mom and I’m proud of you.’”

Those patients are part of a program that was started a few years ago to help pregnant women with opioid use disorder.

“We started to see these patients out of necessity, they started to show up because they needed care,” said Dr. Tara Benjamin, a maternal-fetal medicine specialist, who is also the director for the maternal recovery program at Riley Hospital for Children at IU Health.

Since 2015, they’ve treated around 330 women. At any given time, she will be treating around 60 women, both pregnant and post par-tum. The women in the program are given Buprenorphine and they undergo counseling.

“I generally have two types of patients: there’s a patient that has been in recovery for awhile and her provider can no longer care for her because she’s pregnant and so she pretty much just transfers her care to me for the duration of the pregnancy so she can be provided with this kind of medication.  And there are patients that are actively using and have never really been in recovery. These patients usually come to us in the hospital in active withdrawal, we control their withdrawal, we asses them for behavioral complications, psychiatric conditions, any trauma history or any other complications that need to be treated in addition to opioid disorder and then we get them in our opioid program.”

Benjamin says its the women’s stories that keep her motivated to do her work.

Benjamin says pregnant women are “the least, the last, and the lost of the opioid epidemic.”

“Because there’s treatment for people with opioid-use disorder, but if you’re pregnant it’s hard to find treatment because one, doctors are scared of litigation as far as taking care of a pregnant woman and not having any obstetric background or doctors are not reimbursed adequately when women have certain types of medicaid that it is emergent medicaid so those are deterrents to treating pregnant women, if you’re an obstetrician, and the other side of the coin, obstetricians aren’t necessarily going to treat for addiction, so where are these women supposed to go to get treatment?” she said.

Something her program is hoping to change, with the help of nurses who have been there.